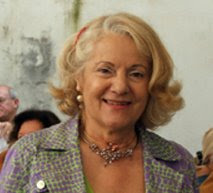 Author Antonia Arslan described the massacre of her extended family in Turkey to a crowded auditorium at the University of Rhode Island Monday as part of a two day event.

Arslan's grandfather told her at a young age the story of his brother's family. In 1915, Turkish soldiers massacred the males of the family at the ancestral family farm. They sent the women and children on a forced march across the desert. [more]
Posted by Your Portal to Armenian American Student Activism at 1:19 PM