"Armenian contemporary art and cultural divides were on the minds of international scholars, artists, and musicians who gathered in Alfred Lerner Hall to participate in a day-long forum on the Armenian diaspora and artistic development on Saturday.

The forum, which was held by the Armenian Club, addressed questions of contemporary Armenians about their culture’s perceived shortcomings." [More]
Posted by Your Portal to Armenian American Student Activism at 3:05 PM No comments:

Fighting the Denial of Genocide [UCLA] 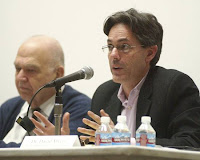 In a panel discussion titled “Facing Denial, the Last Stage of Genocide,” four experts spoke about the injustice of denying the Armenian genocide.

The event, hosted by the Shant Student Association and the Armenian Graduate Students Association, was held in order to acknowledge all genocides, said Raffi Kassabian, executive officer of AGSA.

The Armenian genocide refers to the killing of Armenians in the Ottoman Empire beginning April 24, 1915.

The total number of Armenian deaths are estimated to be around 1 million to 1.5 million. Turkey, the successor state of the Ottoman Empire, does not recognize these events as genocide.

But Joey Kurtzman, executive editor of Jewcy, an online magazine, said there is an overwhelming consensus regarding the Armenian genocide. [more]
Posted by Your Portal to Armenian American Student Activism at 10:44 AM No comments:

In a recent letter to the editor sent to the California State University, Long Beach (CSULB) school newspaper, two proffesors of history at the school challenge the denialist notion that the Armenian Genocide is somehow "hotly debated" in academic circles.

Their letter is in response to an article which described a recent panel on the Armenian Genocide at the school as "controversial" and "disputed." The article suggested that the panel was contested by the audience and faculty for not having a voice supporting the Turkish government's denialist position.

The two professors point out in their letter that "Scholars who have done exhaustive research confirm the Armenian genocide" and they explain that material suggesting the Genocide did not occur is "deeply affected by the involvement of the Turkish government, which has vigorously and consistently denied that a genocide - or any government-directed massacres - took place." [more]
Posted by Your Portal to Armenian American Student Activism at 12:26 PM No comments:

The Armenian Graduate Students Association held its sixth annual colloquium on Friday afternoon – an event that featured speakers from domestic and international universities in panels pertaining to topics in Armenian studies.

This year, graduate students attended from Armenia, Hungary, Germany and Turkey; as well as from University of California, Irvine and California State University, Northridge. [more]
Posted by Your Portal to Armenian American Student Activism at 9:59 AM No comments: