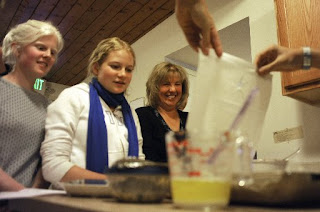 Most of the students crowded into the kitchen at Boulder's Tara School for the Performing Arts raise their hands. Each is involved in Tara's upcoming production of the play "Nine Armenians."

Christianian is one of several local Armenian-Americans the Tara cast has encountered to learn about different aspects of Armenian culture. Today, Christianian is teaching the students how to make cheese beoreg, an Armenian cheese turnover made with filo dough, butter and various cheeses. [more]
Posted by Your Portal to Armenian American Student Activism at 7:03 AM